We have arrived in Europe! My sister and I have been in Esslingen, Germany for a bit over a week now, but we spent the first few days of our European journey exploring Amsterdam. Before I went to the Netherlands, it was never really a place on my bucket list, even after I watched The Fault in Our Stars and saw how beautiful it was. But after actually spending 36 hours in the city, I can say for certain that I will be back. Amsterdam is truly the beautiful Venice of the North, or as some geographically challenged individuals have said, the Venice of Europe.

Now I am the self-proclaimed queen of short trips, from an 8 hour day trip to New York City to 48 hours in Lima, Peru and 12 hours in New Orleans, I know how to jam pack a day with enough fun and relaxation to make it feel like you are doing everything and nothing at once.

We arrived on a Wednesday afternoon, around 5 PM, and took the train from Schipol to Centraal, then embarked on the grueling 15 minute walk to our hostel (okay grueling may be an exaggeration, but we had been carrying our 50 pound backpacks around airports for 12 hours by then!). We stayed at Shelter City Amsterdam, a large christian hostel with amazing breakfast. Now my sister and I have quite different tastes in food, so when it came time to choose a place to eat dinner, our hangriness took over. We settled on some Italian food, because who doesn’t like that? After dinner, we decided to stroll around a bit, but then soon retired as our jet lag was catching up to us.

On day two, we woke up early and had a filling breakfast at our hostel, before leaving to see all Amsterdam had to offer us, and dodging all its bikes on our way. We walked to the historic flower market, where thousands of tulips were being sold, the Amsterdam famous flower. We also went to Dam square and saw the royal palace, and stopped for some lunch. We had a very Dutch lunch of bread, Amsterdam cheese, and fig compote for me, and a smoked salmon sandwich for Sophia. 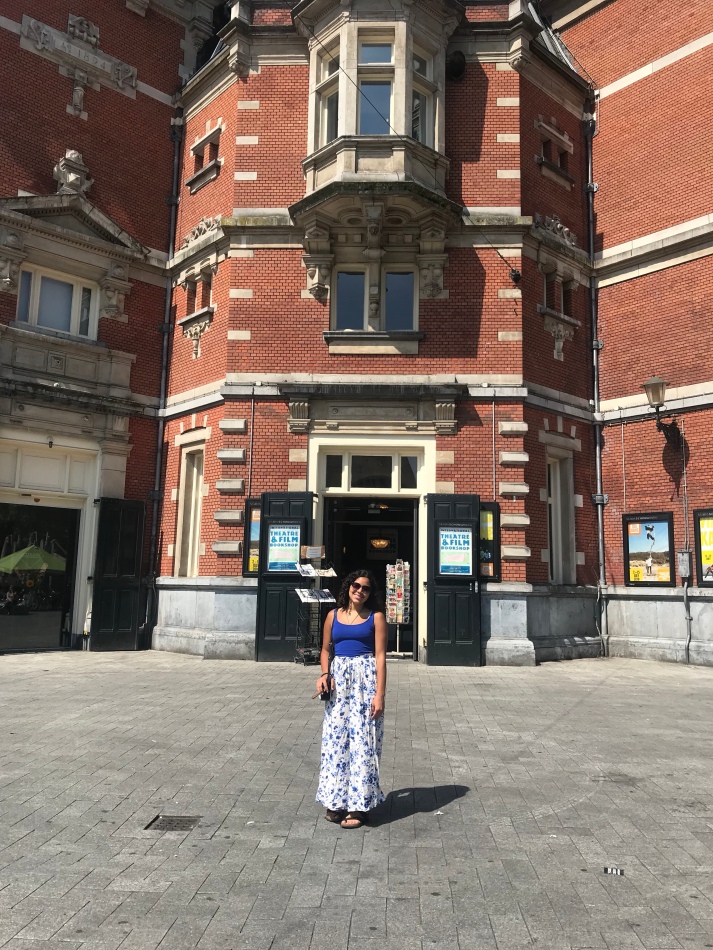 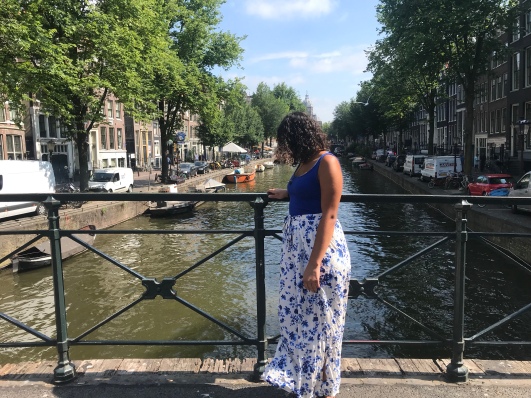 After lunch, we had signed up for a free tour of Amsterdam led by Sandemann’s Tours. It was 10/10. We met our guide at Dam Square, and he was a young fellow who worked part-time as a comedian, so we were well entertained. it was on this tour that I learned many things- such as a coffee shop is not really a coffee shop in Amsterdam, at least not the ones we are familiar with. Coffee shops are simply places where they sell marijuana and weed-infused goods. I also learned there was a time in Dutch history where a tulip bulb was worth more than its weight in gold. These facts, infused with jokes about Dutch people’s height and bikes, made the tour well worth it. Our tour guide also gave us some aged Amsterdam cheese, which was delicious. We went through the Jewish district, past the royal palace, through Begijnhof, to the Jordaan district, ending at the Anne Frank House. Here I learned that Anne Frank was voted the most inspirational Dutch person, an amazing feat because she isn’t even Dutch. We really wanted to check out the Anne Frank House and Museum, but tickets sell out months in advance, and we were a bit too late. 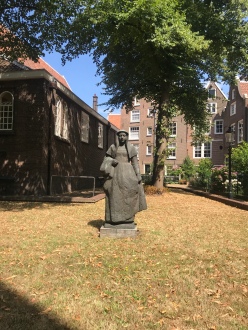 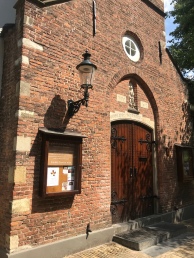 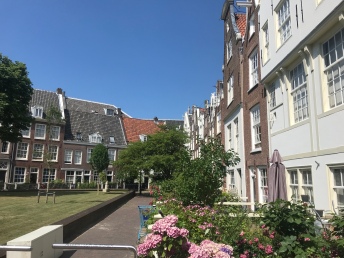 After the tour, our aching feet convinced us we needed a break from walking. So, how do you get around in a city full of canals when you don’t want to walk? A boat of course. We signed up for a canal cruise at a Tours & Tickets stand, then boarded our small boat for the 1 hour cruise. Our guide was a Dutch man born and raised, and spoke about Amsterdam like it was his great love, telling all sorts of stories about its history. I learned that the canals (165 of them!) that run all throughout the city have thousands of bikes in them that are fished out each year, and with the amount of bikes I’d seen throughout the city, that didn’t surprise me at all. 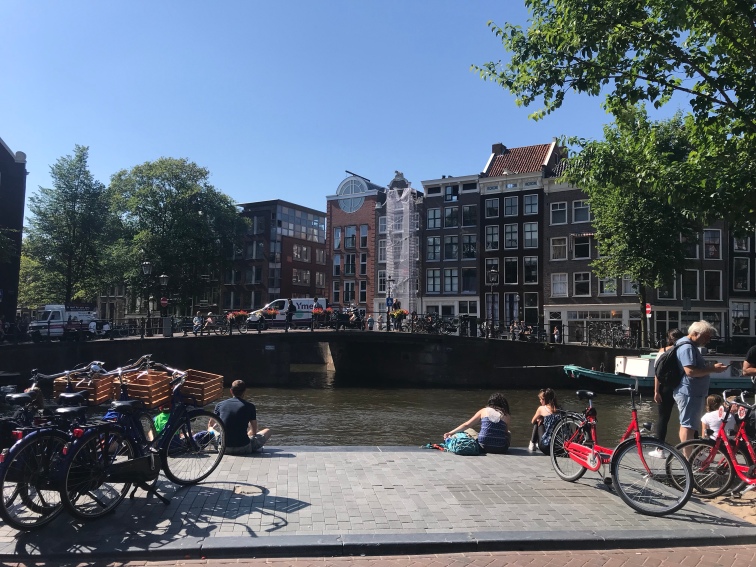 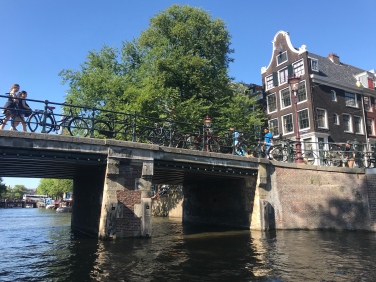 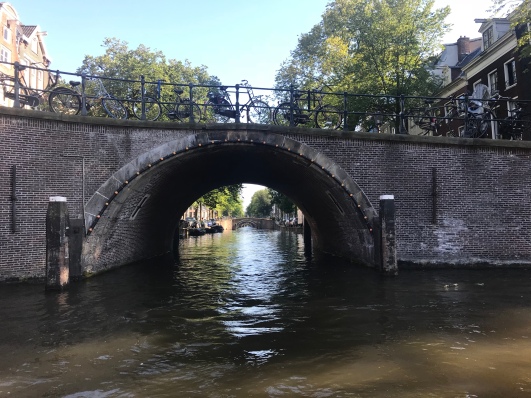 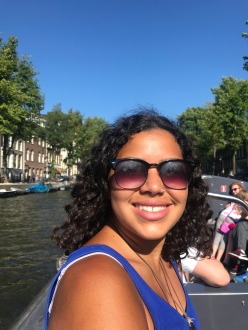 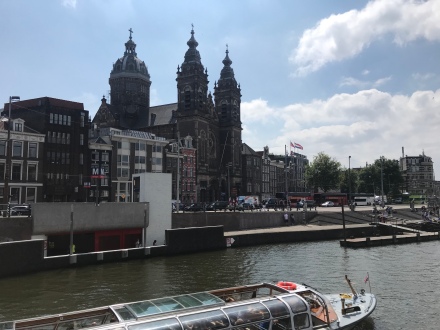 After our little cruise, we were starving. We walked and walked, until we came across an Argentinian restaurant that had vegetarian food for me! Dinner was good, and after we decided to walk through the infamous red light district our tour guides had both spoken about. By now I had learned Amsterdam was famous for two things- marijuana and prostitution. The red light district was certainly a sight, but nothing I would ever want to see again. I hardly want to describe it, but essentially prostitutes just sit in these window boxes waiting for a client and peering at passerby’s. The kind of people walking through here shocked me too, hoards of tourists walking through, toting children, husbands, and wives along. It truly felt like any other part of the city.

We called it an early night, as we still were not over the jet lag, and headed back to our hostel.

The next morning, we got up early again, then headed out for some more sight seeing. We didn’t have much time today, as we had to be at the airport around two. So we decided to walk until lunchtime, where we had a few drinks and some more delicious Dutch cheese, then saw the most spectacular sight in all of Amsterdam, De Poezen Boot. The cat boat is a floating cat sanctuary, yes you read that right, a cat sanctuary on a boat. It is stationed in a canal and allows visitors on certain days. We had to wait in line for about 20 minutes, but it was well worth it. The resident kitties are free to roam around and are very adorable, and there are other cats there waiting to be adopted. I’d say the cat boat alone made the trip to Amsterdam worth it, although I am speaking as a cat lover and owner of 4 kitties. 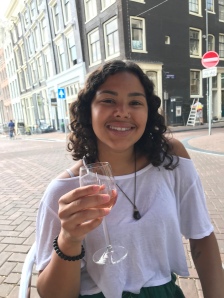 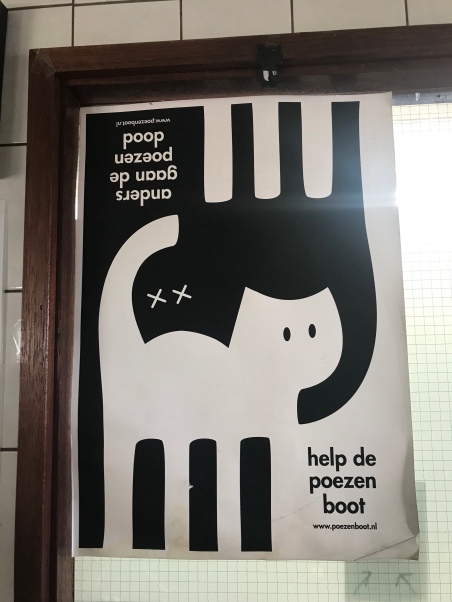 After the cat boat we made our way back to ur hostel and then to the airport, boarding our flight to Stuttgart. Germany here we come!